The Mid-Autumn Festival welcomes the autumn harvest and full moon and is a traditional Chinese festival celebrated around the world by East and Southeast Asian cultures, also known as the Moon or Lantern festival. It is the second most important holiday after the Lunar New Year and dates back 3,000 years to the Zhou Dynasty (1046 - 256 BC) when the Emperors worshipped the moon for bountiful harvests. The earliest written record of the word “Mid-Autumn” was from the Han Dynasty (202 BC - 220 AD) and the following dynasties adopted the customs of worshipping the moon and singing and dancing in the moonlight on the 15th day of the 8th lunar month.

The festival celebrates three fundamental concepts that are interconnected:

Much of the traditions and folklore surrounding the festival are formed around these concepts, although traditions have changed over time due to changes in technology, science, economy, culture, and religion. It’s about well-being together.

The Mid-Autumn Festival originated from the worship of celestial phenomena, it evolved from the worship of the moon in autumn in ancient times when ancient Chinese emperors offered sacrifices to the moon in autumn to pray for a good harvest in the coming year. In the Tang Dynasty (618 - 907 AD), appreciating the moon became popular among the upper classes. Following the emperors, rich merchants and officials held big parties in their courts. They drank and appreciated the bright moon. Music and dances were also indispensable. The common citizens just prayed to the moon for a good harvest. Later in the Tang Dynasty, not just the rich merchants and officials, but also the common citizens, began appreciating the moon together. The custom of eating moon cakes at the Mid-Autumn Festival also began in the Tang Dynasty amongst the nobles but did not became a common food custom for all people until the Ming Dynasty. Since the Ming Dynasty, moon cakes were only eaten at the Mid-Autumn Festival, which was the main offering of moon sacrifice popular among the people.

An important part of the festival celebration is moon worship. The ancient Chinese believed in rejuvenation being associated with the moon and water, and connected this concept to the menstruation of women, calling it ‘monthly water.’ The Zhuang people, for example, have an ancient fable saying the sun and moon are a couple and the stars are their children, and when the moon is pregnant, it becomes round, and then becomes crescent after giving birth to a child. These beliefs made it popular among women to worship and give offerings to the moon on this evening.

In China, the Mid-Autumn festival symbolizes the family reunion and on this day, all families will appreciate the moon in the evening, because it is the 15th day of the eighth month of the Chinese lunisolar calendar, when the moon is at its fullest. The beautiful myth about the Mid-Autumn festival is Chang’e, known as the Moon Goddess of Immortality, flying to the moon-- it explains the origin of moon worship during this day. One version of the story is as follows:

In the ancient past, there was a hero named Hou Yi who was excellent at archery. His wife was Chang'e. One year, the ten suns rose in the sky together, causing great disaster to the people. Yi shot down nine of the suns and left only one to provide light. An immortal admired Yi and sent him the elixir of immortality. Yi did not want to leave Chang'e and be immortal without her, so he let Chang'e keep the elixir. However, Peng Meng, one of his apprentices, knew this secret. So, on the fifteenth of August in the Chinese lunisolar calendar, when Yi went hunting, Peng Meng broke into Yi's house and forced Chang'e to give the elixir to him. Chang'e refused to do so. Instead, she swallowed it and flew into the sky. Since she loved her husband and hoped to live nearby, she chose the moon for her residence. When Yi came back and learned what had happened, he felt so sad that he displayed the fruits and cakes Chang'e liked in the yard and gave sacrifices to his wife. People soon learned about these activities, and since they also were sympathetic to Chang'e they participated in these sacrifices with Yi.

“When people learned of this story, they burnt incense on a long altar and prayed to Chang'e, now the goddess of the moon, for luck and safety. The custom of praying to the moon on Mid-Autumn Day has been handed down for thousands of years since that time." 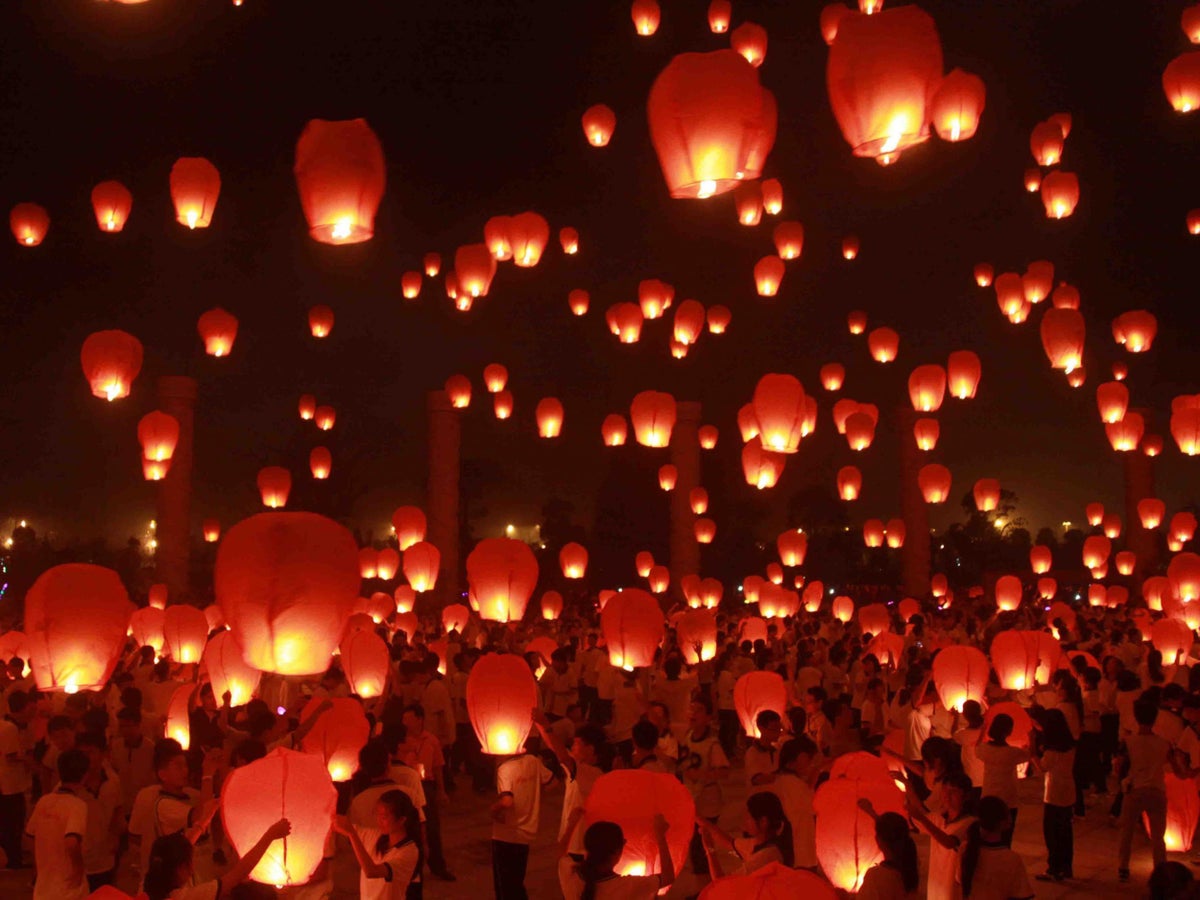 Mooncakes are the most representative food for the Mid-Autumn Festival, because of their round shape and sweet flavor. Family members usually gather round and cut a mooncake into pieces and share its sweetness. Nowadays, mooncakes are made in various shapes (round, square, heart-shaped, you name it!) and in various flavors, which make the more attractive and enjoyable for a variety of consumers. In some shopping malls, super big mooncakes may be displayed to attract customers, although round mooncakes are still loved by most people for their reunion symbolism. During the Mid-Autumn Festival, people love to give gifts to their loved ones, friends, parents, other relatives, and staff. Mooncakes are the top option among all gifts. Other popular gifts are fresh hairy crab, tea, fruit baskets, and organic rice and oil.

Making the colorful lanterns that the festival is known for is children’s favorite activity. Mid-Autumn lanterns have many shapes and can resemble animals, plants, or flowers. The lanterns are hung in trees or on houses, creating beautiful scenes at night. Some Chinese people write good wishes on the lanterns for health, harvests, marriage, love, education, etc. In some countryside areas, local people light lanterns that fly up into the sky or make lanterns that float on rivers and release them like prayers of dreams coming true. The lanterns are symbolic beacons that light people’s path to prosperity and good fortune.

Today, besides the traditional activities, many Chinese people send WeChat red envelopes and/or go traveling during the 3-day public holiday to celebrate the festival. Besides the above common celebrations, different regions also have some unique traditions. For example, in Hong Kong, an annual fire dragon show is held in the Tai Hang neighborhood during the Mid-Autumn Festival. 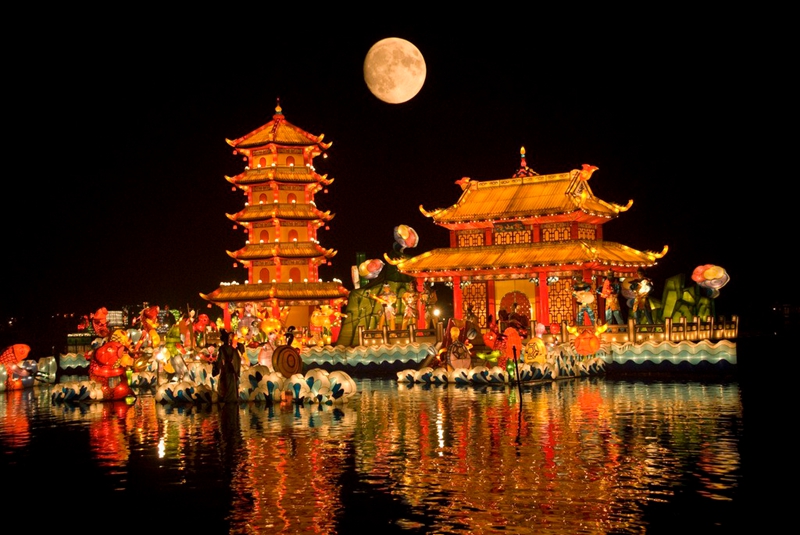